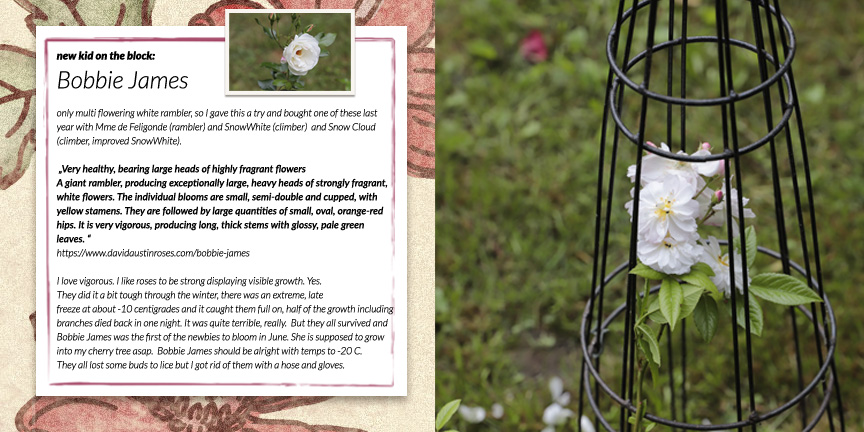 Tags: 5 minute layout, 6x6, Garden, gardening, Lifestyle, roses, summer, template
Hello and thanks for stopping by at greene edition for some ramblings about the roses inspired by a challenge at Pixel Scrapper. Were you promised a rose garden? I sure wasn’t and if I had been I would have been surprised to say the very least. Instead, I moved into a rose garden. Now that the roses are so pretty I wanted to document my nerdy passion and maybe compile a rose book to later print and have a pretty picture book to look at in times when the roses are not in bloom.

Bobbie James is a white rambler supposed to grow into my cherry tree. It was planted into the ground last October (2019) and had a bad night in late April when it froze to an unheard of -10 C for a few hours and a lot of the visible growth died back. But Bobbie James is a rose and they are hearty.

My rose garden starts at the gate with a larger red climber of about 5 m height spilling over the wall onto the sidewalk called ‘Sympathy’, constantly producing flowers from May to November. It has an excellent if a bit muggy spot with wonderful fertilizing  from the concrete wall and the neighbor’s free water because his sprinkler system sprinkles Sympathy’s roots for 2 hours each day. Then there is a Japanese Cherry tree and a little group of bushes ‘Rosa Alba’ underneath it, fragrant somewhere between roses, limes and lemons. Behind the Albas there are two rose bushes called ‘Snowcap’ also with a wild rose character like Alba. Snowcap has the scent of Rosa Damascena and a lilac color later whitening.

Then there is a yellow constant bloomer called ‘Romantica Superbloom’ also with a bushy, wild rose trait and lovely scent. Another white bloomer called ‘Petticoat’, a shrub sits closer to the house.  It gets a lot of sun and is the sort of modern, polyanthra rose that produces multiple flowers on one stem and can have the look of a perfect flower ball. Petticoat is pretty tall, at about 3,5 meters it isn’t easy to cut the flowers on top. Petticoat’s buds appear yellow, the flower opens white with light yellow petals to the side and later whitens out.  In front of Petticoat, next to the driveway, there is another white bloomer called ‘Escimo’ with open, flat, smaller flowers much looking like Alba but with silkier petals of an incredible pure white color. The enitre plant is more of a ground cover than a high growing bush like Petticoat.

Next to them fastened to a lamp post is climber ‘Moonlight’,  the exception to otherwise classy colors. But Moonlight has every right to be there in that prominent place because it blooms non stop from May to November and smells like heaven with a saturated, somewhat kitchy color play between yellow, pink, orange and apricot-salmon. The buds appear orange to red and open to a lighter color play, a very brilliant rose.  Moonlight has an even sunnier spot than Petticoat and gets a lot of light in the winter time which again promotes her very early flowering, sometimes as early as first week of May together with Alba under the Japanese Cherry and the Scottish Fence Rose.

Then there is “Fairytale Castle Saba” and incredibly beautiful, full on tea rose in light rose, later whitening with a scent of Rosa Damascena and lemon. Very beautiful. Behind her is a rose that I do not know the name of but her flowers are like the ones of camelia flowers and the color is nearly neon red. The Scottish Fence Rose is the first rose to bloom, it has a very sunny spot is about 6 meters in height and a showstopper when it blooms. It sits by the garage and gets a lot of sun also in the winter time. The flowers are small, flat, pink and fragrant. An extremely strong rose that can withstand temps to -20.

Then there is the flower bed in front of the house, there is one rose called ‘Snow Waltz’ which has the largest flowers that I have seen on roses, planted 4 years ago and grown fantastically to a height of 4 meters. Snow Waltz has a cream color with extremely large blooms of +15cm in diameter and sits in front of a light yellow building. Things could really be looking worse.  Underneath Snow Waltz there is some white phlox just to keep the ground from eroding there. Behind Snow Wlatz there is a white ground cover rose called ‘Supermax White’ which I planted last year to grow over the Forsythia in front of it and like spill onto the ground. Supermax hasn’t really caught up on the plan as to yet and we are hoping that he will come into line or he has to go. Sorry, Max. In front of the English Forsythia there is another Supermax in yellow which I thought would look great under the cascading Supermax White, kind of like a waterfall with the yellow water underneath. So were my thoughts but they were short. I think it really gets too hot for the yellow Supermax because it sits too close to the concrete edge.

Then there is the other side of the driveway with more trees: ginko, hawthorn, hazelnut, willows and a bigger goji farming spot where it is hottest. I harvested over 10 kg of goji berries last year in the last harvest in November alone and had fresh goji’s from September on every day too. The first on the other side of the driveway is one by David Austin ‘Claire Austin’ with a beautiful lemony, yellow color, it is doing it tough beteewn the aggressive gojis. A bit further toward the gate there are two more called ‘Lions Rose’ by a grower called Tantau.

These are the roses in the front yard.

The back yard is seperated from the front by a small house, a garage and about 6 meters to the side occupied by a paved way of about 3 meters width and an equally wide row of cypress trees of about 15 meters in height. After about 20 meters on that trail I get to the back yard. the roses start at the right with three David Austins in front of the dark cypresses. They are: Desdemona in White and two more Claire Austins in yellow. Great stuff.

To the left by the house there is a big row of ‘Amadeus’ covering the width of the back porch. I do not know how many  there are, but at least 10 and they are vigorous in growth, they are the only ‘one bloom only’ roses that I have. In fact, there was only one and I cut some twigs and just stuck them into the ground and they rooted. They have incredible fertilization from the concrete porch and the granite bed that surrounds them. They bloom overly rich and only once from May til mid July with a late 2nd bloom in mid September, modern polyanthra, no scent. Amazing show right at the kitchen door and across the porch. There are a few ‘New Dawn’ planted in between the Amadeus. New Dawn is a pale rose, later whitening climber with a characteristic, creamy scent, and constant lovely flowers. There is also a white Milky Way right at the patio that is doing it tough between all the climbing Amadei. The show is pretty great when the Jasmine comes out behind the Amadeus and hangs over them, cascading flowers of jasmine right on top of the roses. In fact it is nearly 7 meters tall now. There are two more orange bloomers, shrubs  called ‘Westerland’ about 2,50 in height producing large, scenting flowers regularly. Then there is one that needs relocation ‘Summerwind’ is pink and behind a giant needle tree. Another spin of ‘fairy’ ‘Summer Tale’ in red sits under a tree together with ‘Queen Lucia’ in yellow. There is also one that is called Mme Ahrends with the scent of rosa damascena.

Today I got a package from a garden supplier with Isotoma Blue Foot which is supposed to be the greatest ground cover ever in light blue, might be nice. I invested 30 bucks and got 3  packs of 3, they are in the ground already and I cannot wait to see them bloom and cover the entire lawn. I am still waiting for two more white climbing roses: Abbey Rose and Alaska. I ordered them the same day I ordered the Isotoma but from a different dealer. They’ll be here tomorrow.

Please see the shop for some lovely kits to document your garden with.